After decades of development, the PCB industry has become a global industry. In recent years, the global PCB industry output value accounts for more than 1/4 of the total output value of the electronic component industry, and it is the industry with the largest proportion of the electronic component segmentation industry, occupying a unique position. In order to actively respond to the development needs of downstream products, PCBs are gradually developing in the direction of high density, high integration, fine lines, small aperture, large capacity, light and thin, and the technical content and complexity are continuously improved.

2. Asia has become the global PCB leader, and China is at the center of the Asian market.

Before 2000, 70% of global PCB production value was distributed in Europe, America (mainly North America) and Japan. Since the beginning of the 21st century, the focus of the PCB industry has continued to shift to the Asian region, forming a new industrial structure. The PCB output value in Asia is close to 90% of the global total, which is the dominant PCB in the world, especially in China and Southeast Asia. According to Prismark, since 2006, China has surpassed Japan to become the world's largest and fastest-growing PCB manufacturing base, and has become a major growth driver for the global PCB industry. In 2012, China's PCB output value reached 21.636 billion US dollars, accounting for 39.84% of the global PCB output value. From 2008 to 2012, the annual compound growth rate of China's PCB production value reached 9.52%, higher than the global growth level. According to Prismark, China's PCB production value will reach 28.972 billion US dollars in 2017, accounting for 44.13% of the global total output value. 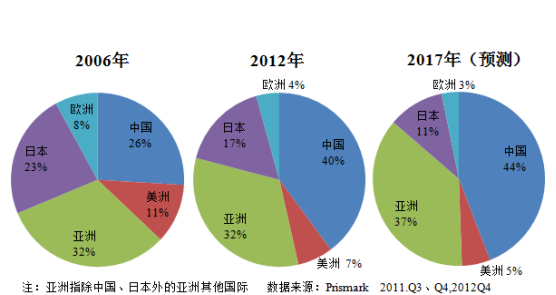 3. The global PCB product structure is increasingly optimized, and the future development trend is clear.

The good development momentum of the electronic information industry is the basis for the growth of the PCB industry. The continued high prosperity of the PCB downstream sector will drive the rapid development of the PCB industry. With the development of modern technology, the downstream field of PCB is currently experiencing favorable opportunities for technology upgrades and product replacement. The replacement cycle of the top three computer, communication and consumer electronics products is steadily shortening. The new consumption hotspots have made the PCB industry face a broader market space and scale of demand. According to Prismark statistics and forecasts, the global electronic system product value in 2010 was $1.756 billion, reaching $1.99 billion in 2012, and $2.369 billion in 2017, with an average compound annual growth rate of 4.41%. 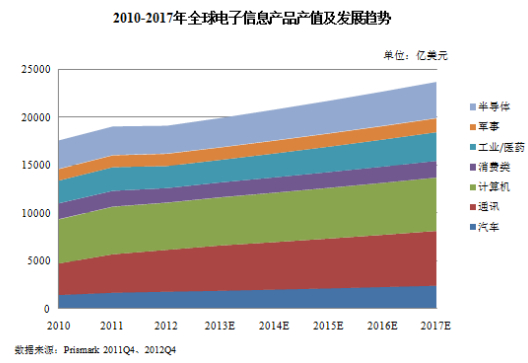 Previous：今天分享：pcb板设计工艺的一些原则
Disclaimer: this article is derived from Jin Zhizhuo website integration, such as articles and draft involve issues of copyright, the author in the contact, please in this website, we will deal with as soon as possible.
Address：http://www.gtl-tech.com/news/12.html
Share the：
If need to solve a problem, please join our WeChat customer service or online customer service;
Related articles
News
Home Electronic Design PCB Layout Design PCB Fabrication SMT Patch News About GTL Contact GTL